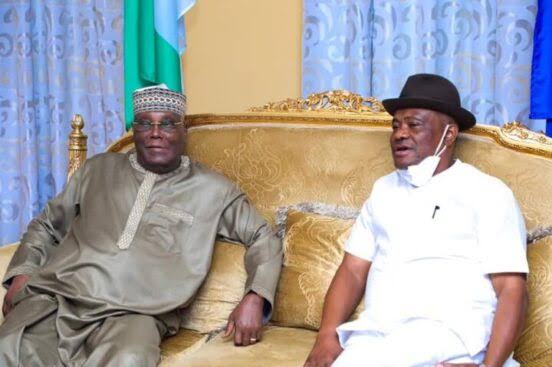 According to newsmen Atiku Abubakar, presidential candidate of the Peoples Democratic Party (PDP), and Nyesom Wike, governor of Rivers, met in the federal capital territory (FCT) on Thursday.

The meeting was said to have taken place at the home of Jerry Gana, a former information minister and member of the PDP board of trustees (BoT).

According to a source, Thursday’s meeting was “positive,” and there would be more “fence-mending” in the coming days to resolve the party’s crisis since the presidential primary in May.

“Nyesom Wike and Atiku met today at professor Jerry Gana’s house in Abuja. It was a good meeting and there will be more meetings in the coming days,” the source said.

The meeting comes just hours after the PDP BoT formed a committee to resolve the feud between the two men.

Meanwhile, following a meeting with Wike, his allies, and some PDP governors on Sunday, Gana stated that Nigerians would be kept informed of the party’s activities as “developments unfold.”

“We have met together for the first time after the primaries of the PDP. We have frankly reviewed matters among ourselves,” he had said.

“We want to confirm that we are solidly together as a group and we also want to let the nation know that we shall keep our people briefed as developments unfold.”

The crisis in the party erupted after Abubakar chose Delta Governor Ifeanyi Okowa as his running mate in the 2023 presidential election.

Wike ran for the PDP presidential ticket in May but lost to the former vice-president following the dramatic withdrawal of Sokoto Governor Aminu Tambuwal from the race.

Following the announcement of Okowa as the PDP’s vice-presidential candidate, party stakeholders expressed concern that Abubakar had overlooked Wike, who was said to be the preferred candidate among the majority of the national working committee (NWC) members.

The party’s divisions worsened after Abubakar gave an interview to ARISE TV in which he stated that he didn’t choose Wike as his running mate because he wanted someone with whom he could work “amicably.”

Wike, on the other hand, responded by saying that the presidential candidate was lying and that he would speak on the issues soon.