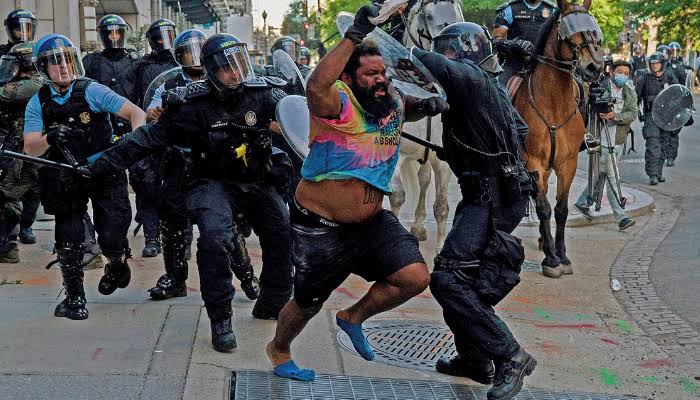 Following the death of George Floyd, a black man that was allegedly killed by Derek Chauvin, a white Police officer, in the United State, unrest intensifies in New York, Washington and Los Angeles

Earlier on Tuesday, June 2, the President of the U.S, told newsmen that he may be forced to release the polic6e men against the people, who took to the street to protest peacefully. It was even seen that Police operatives at the white house at that moment shot rubber bullets at the peaceful protesters and used tear gas on them as well, an act that has been condemned by Joe Biden, Trump’s challenger in November Presidentialelections. He said that Floyd’s final words of “I can’t breathe” should serve as a “wake-up call for our nation”.

“They speak to a nation where too often just the colour of your skin puts your life at risk,” Mr Biden said. “It’s time to listen to these words, understand them, and respond to them with real action.”

He also slammed Mr Trump over the use of tear gas on peaceful demonstrators near the White House on Monday.

“When peaceful protesters are dispersed by the order of the President . . . in order to stage a photo op at a noble Church, we can be forgiven for believing that the president is more interested in power than in principle,” Mr Biden said.

However tension intensifies as five policemen have been reportedly killed by protesters.

According Financial Times Four Police officers were shot in St Louis, Missouri, as authorities struggled to regain control of the city’s streets late into Monday evening. The officers, who were being treated for non-life-threatening injuries in hospital, were hit by gunfire as they stood next to a Police line during violent disorder, said the chief of Police, John Hayden.

Another Police officer was shot at Nevada, near the Las Vegas Strip. Authorities were also responding to a second separate shooting in the area, the AP said.

Elsewhere in the state, two Police officers in Buffalo were injured after a car was driven through a Police line. Mark Poloncarz, Erie County’s executive, wrote on Twitter that the two officers were “allegedly in stable condition” after the incident.

Derek Chauvin, the white Police officer who knelt on George’s neck force about 8 minutes till he died would be arraigned before court on charges of third-degree murder.

Meanwhile, the US remains the epicentre of the COVID-19 pandemic, with over 100,000 deaths and millions of confirmed cases of the ravaging virus.