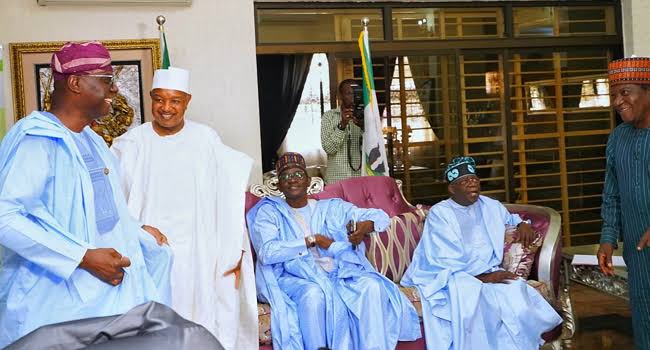 Ahead of 2023 General Elections, governors elected on the platform of the All Progressives Congress (APC) on Monday met in Lagos with the party’s presidential candidate, Asiwaju Bola Tinubu, to take a final decision on the formation and structure of the party’s Presidential Campaign Council (PCC) for next year’s exercise.

Nigerian Tribune gathered that the meeting which has since commenced behind closed-door, was called to decide on who finally takes charge as the DG of campaign council as well as the composition of the Media and Communications Directorate of the campaign council which needs to step up their work as soon as possible, ahead of the start of campaigns on September 28.

The ruling APC had earlier picked its immediate past National Chairman, Adams Oshiomhole, as the chairman of the campaign council, while Kaduna State governor Nasir el-Rufai, was picked as the Director-General,

But days later,  Plateau State governor, Simon Lalong, was being considered to replace el-Rufai as the campaign council DG, it was gathered.

It was further gathered that Lalong was being considered to replace el-Rufai as the campaign council DG because of his appeal to the Christian majority in the Middle Belt and aggrieved Christians in the North.

On the composition of the Media and Communications Directorate of the body, findings indicated that the APC governors wanted to effect the necessary change as interests within the party were said to be pushing for Minister of State, Labour and Employment, Festus Keyamo, as campaign spokesperson.

It would be recalled former Managing Director of the News Agency of Nigeria, (NAN), Mr. Bayo Onanuga, had for the past five months, been the Director, Media and Communications of Tinubu Campaign Organisation.

Onanuga and his team pivoted Tinubu’s campaign months leading to the APC presidential primary election and have been in charge since Tinubu emerged as the party’s flagbearer.

Final decision on who does what is being expected at the end of the high level is ongoing at the Bourdillon residence of APC presidential candidate, Asiwaju Tinubu.