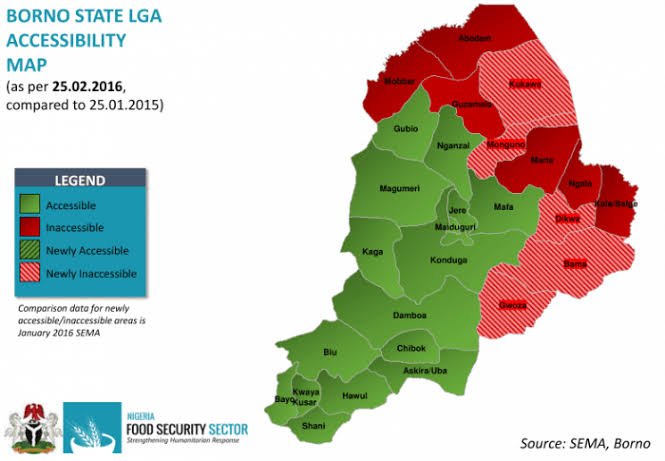 Thousands of civilians are trapped in Dikwa after Boko Harm insurgents took control of the town Monday night, says a Military source.

CRIMECHANNELS gathered that the insurgents, who are currently roaming the town are telling people not to flee but stay where they are.

According to the Military source, operatives of the Nigeria Army are gearing up in an attempt to take the town back from it’s captors.

A resident of Dikwa, Bukka Ahmed, narrated how the insurgents told his neighbourhood to stay and not leave.

He said, “They said we should stay, they told us that they are not here to harm us but the Soldiers. Their motorcycles and gun trucks are in the town.”

“Boko Haram are in control of Dikwa as I speak with you, they are roaming the streets, help us talk to President Buhari to save our soul, “he said.

Dikwa town is about 90km from Maiduguri, the Borno State capital. The town also hosts the military Super Camp 9 where the Army Chief visited last week and ordered the retaking of Marte, which is about 20km away.

Meanwhile, a humanitarian worker said that Boko Haram has infiltrated the United Nations hub in Dikwa.

He said, “The situation in Dikwa is scary, thousands of civilians are trapped, we need a quick response from troops to save lives.”

“The town is under siege; the government must mobilise resource to salvage the situation as soon as possible.”