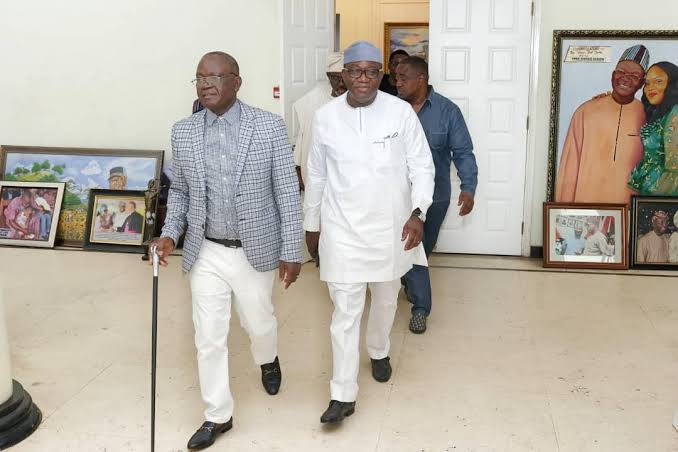 Samuel Ortom, the governor of Benue State, has asked Kayode Fayemi, the governor of Ekiti State, to transfer from the ruling All Progressives Congress (APC) to the Peoples Democratic Party (PDP) in his bid to become Nigeria’s next president.

Ortom, who met Fayemi at the Government House in Makurdi on Saturday during the latter’s visit to drum up support for his presidential bid, said he was working for a president to emerge from the south.

He urged Fayemi to pursue his goals with zeal, saying that if he had been in the PDP, he and ex-Governor Gabriel Suswam, who was also there during the visit, would have worked for him.

He said, “If they mess you up in APC, come to PDP and join us so we can prosecute Nigerians’ agenda.

“Some of us have made our positions very clear. We are from the north but believe in a southern presidency because we believe in fairness, equity and justice. Yet, if my party says it’s a northern candidate, I would have no choice but to succumb.

“But the truth must be told, the presidency, for some of us who have a conscience, believes that it should go to the south. But if the leadership and delegates decide that it should go to the north, that’s not going to be a problem, then we can queue up and work together. Because we must have leadership, that’s why myself and Senator Suswam believe in the south and we are working for a southern presidency.

“Just like you came here, if we are in APC, we would have been working for you because we know that you have the capacity, knowledge and education to help us out of the problem we are today as a country.”

Earlier, the presidential hopeful said he was at the Government House to pay a courtesy call on Governor Ortom while on the visit to meet with APC delegates in the state.

Fayemi said the visit was to fulfil the tradition of the Nigerian Governorship Forum (NGF) as its chairman, irrespective of the political party differences.