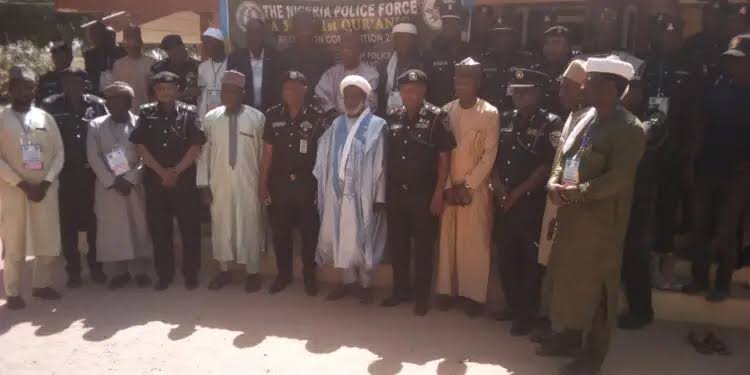 The Commissioner of Police for Kebbi State, Mr. Ahmed Magaji Kontagora Kontagora has organised Qur’anic competition for officers to enable them to move closer to God.

About 18 participants from various Divisional Police Stations would be involved in the recitations of Qur’anic verses in six categories, comprises of memorisation of 60 surah, 40 surah, 20 Surah,10 surah, 5 surah and two surah of the Holy Quran.

While speaking on the important of the competition, the Commissioner of Police,Mr. Ahmed Mogaji Kontagora,who is the sponsor the competition ,said, there are need for the Officers to move closer to God.

He said: “The main purpose of organising this competition is to instill fear of God Almighty in the minds of security personnel particularly the police officers to discharge their duties with the fear of Almighty.

“This competition will aid them to know their creator more, to encourage them to put the teachings of the Holy Book into practice and to ensure adequate security of lives ad property across the state.”

While fllagging-off the completion at the command’s headquarters in Birnin Kebbi, the Emir of Gwandu, Alhaji Muhammadu Iliyasu-Bashar lauded the organisers of the programme for the giant efforts.

The Monarch, who was represented by the Chief Imam, Central Mosque, Birnin Kebbi, Sheik Muktar Abdullahi, urged security personnel to be Godly in discharging their duties.

In his lecture entittled: “Importance of Reading the Holy Qur’an and Puting it Into Practice”, Sheik Muhammad Rabi’u-Danjuma said Qur’an would stand for a man that always ricite it before Almighty God on the Day of Judgement as his/her lawyer to prevent him/her from entering hell fire.

Rabi’u-Danjuma, who is popularly called Tafawa-Balewa tasked parents on moral upbringing of their children, assuring that teaching the child Qur’an would earn such parents special respect on the Day of Judgement.

Drawing his text from Qur’an and Hadith of the Prophet (PBUH), the Islamic scholar assured that Qur’an remained the best path upon which Muslims should follow to paradise.

“Don’t allow your position, wealth or level of Western education to deprive you from reading the Holy Qur’an everyday. Nothing changes the mind of man positively like the Holy Qur’an, therefore, read Qur’an to the best of your ability as it will stand for you before Allah on the Day of Judgement,” he assured.

Earlier, the Chairman of the Organising Committee,CSP Aminu Sadiq,who recalled that since the establishment of the Police Headquarters in 1991,such competition has not been organised untill now.

He explained that the essence of the programme was to enable the officers to be more spiritual and be guarded by Almighty Allah during their service.

By participating in the recitations of, Qur’an, Sadiq noted that, they would always remember that, whatever good deeds they did, such good deeds would be following them and if they did otherwise,they would know that they would reap the consequences.

“It is our believe that,at the end of the three day completion ,the winners will be rewarded with prices and certificates”, he said.

Share
Insecurity: What we need to reduce crimes is Vigilante operatives not state Police Previous post
Set up more checkpoints - House of Representatives tells IG of Police, Military Next post