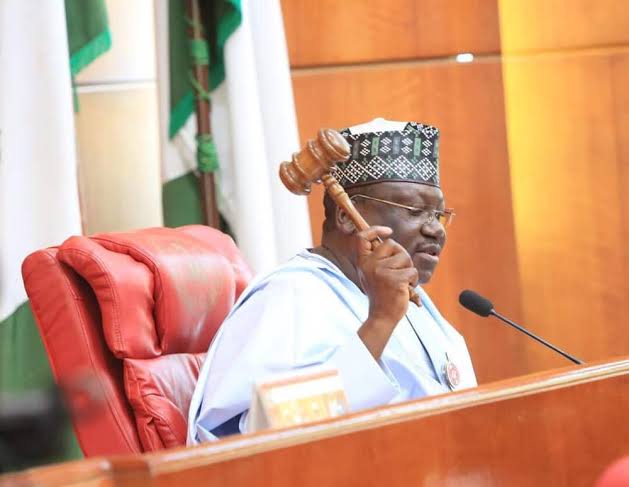 Drama ensued on the floor of the Senate on Wednesday, when the Senate President, Ahmad Lawan, turned off the seat microphone attached to Senator Rochas Okorocha (APC Imo West).

Lawan’s action followed an attempt by Senator Okorocha to question one of the Ministerial nominees, Goodluck Nana Opiah of Imo State.

In response to Okorocha’s request to question the nominee, the Senate President warned the Imo West lawmaker from going against the House’s agreement reached during the Closed-Door session.

The nominee, now a Ministerial Designate, told journalists in the National Assembly shortly after his confirmation that there was no “bad blood” between him and Senator Okorocha, insisting that the former governor meant well.

“There is no bad blood between me and Senator Okorocha. What happened on the floor of the Senate today is an extension of that kind of rumour.

“I can tell you that Senator Rochas Okorocha meant well. I think he wanted to add his voice to my nomination.

“I have heard a series of telephone conversations with him before today. And there is no indication that he was going to oppose my nomination,” Hon. Opiah said.

The ministerial designate also stated that he would use all of his arsenals to make a name for himself in the Federal Executive Council.

“I will do everything using the knowledge I had garnered both in the private and public sectors over the years to add my support to those of my colleagues, members of the Federal Executive Council.

“This is to ensure that we move this country forward with a view to finding solutions to the problems facing our dear country.”

The nominee said, referring to the limited time he would have as a minister to make an impact that “In governance, an hour means forever. And so if I have one week, one month, or one year I think I will put all my arsenals together to leave a mark wherever I will be.”

Opiah also stated that he was pleased to screened by the Senate as a former member of the House of Representatives.

“I feel overwhelmed by the level of cooperation between the House of Representatives and the Senate.

“What happened earlier in the Red Chamber is an indication of the serious partnership between the Green and Red chambers.

“That is very commendable. We must do everything within our powers to encourage that partnership to continue to happen. It should be sustained if not deepened.

“I’m very happy to be nominated as a minister of the Federal Republic of Nigeria.

“I thank Mr President for finding me worthy of this nomination,” he said.

Opiah who was a former Speaker Imo State House of Assembly and former member representing Ohaji/Egbema, Oguta, Oru West in the Federal House of Representative is currently the Commissioner for Petroleum Resources, Imo.