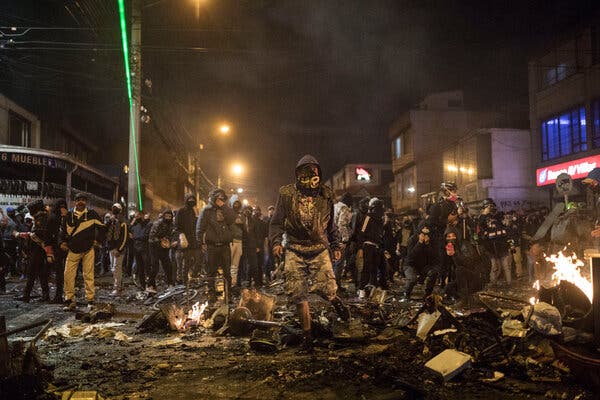 Five people have been reportedly feared dead in Bogota after violent protests erupted in reaction to a Police officer accused of tasering a man to death, according to APF

Protesters took to the street after seeing the viral video which showed the deceased, Javier Ordonez begging Police Officers, who repeatedly teased him for at least 5 times.

The Defense Minister, Carlos Holmes Trujillo offered a reward for the capture of the perpetrators of the murder of the five persons.

The Minister also said he would send law enforcement into the city to help calm the unrest happening on ground.

The protest also saw a lot of destruction. About 46 Police posts were burnt down, as well as public buses.

The video that went viral on Twitter, showed Ordonez, a father of two, crying and saying please stop, no more.

He was taken to a Police station, thereafter transferred to a hospital where he was suppose to be treated on immediately , however, he died afterwards.

“We express our sorrow for the death of Javier Ordonez and offer our solidarity with his family,” Trujillo said.

The death of Javier Ordonez is quite similar to that of United State’s George Floyd, however, in the later’s case, a Police officer knelt on Floyd’s neck for close to 9 minutes.