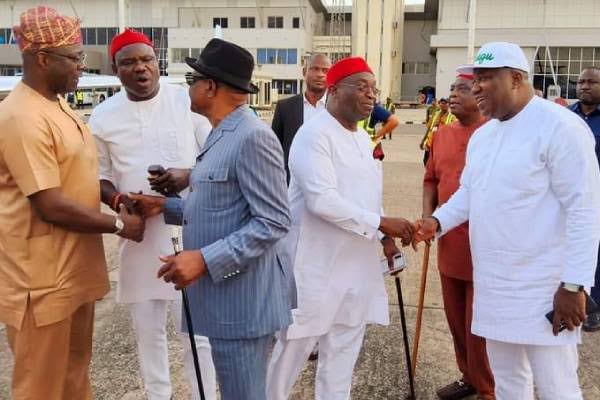 Former APC deputy national publicity secretary Yekini Nabena, has cautioned political leaders, especially in the APC who are still romancing with the five aggrieved governors of the People’s Democratic Party.

Yekini who described the five aggrieved governors as confused, handicapped said they are lacking in capacity to sway election victory for any candidate in next month’s presidential election.

The governors include Samuel Ortom of Benue state, Ifeanyi Ugwuanyi of Enugu state, Seyi Makinde of Oyo state, Okezie Ikpeazu of Abia state, and Nyesom Wike of Rivers state as their leader.

Speaking at a brief interactive session Friday in Abuja, the former APC spokesman said except for Governor Wike, the other four governors have not lived up to the expectations to deliver reasonable votes for any presidential candidate.

According to Nabena, unless INEC delivers election materials to the state government house directly and allows them to manipulate the process, the forthcoming general election is beyond the reach of some poorly-performed serving governors like Ortom, Ikpeazu, Ugwuanyi and Makinde, except Wike who has some infrastructure to show the people.

When asked whether his party will embrace the G-5 if they decide to work for Asiwaju Tinubu, the Bayelsa-born politician said: “The G-5 governors are confused and handicapped whether as PDP men or as supporters of any opposition party.

“If they support our party and we win in the February presidential election, our members won’t see the G-5 governors as an ally to be trusted. Again if they change their minds and work for Atiku, and (God forbid) PDP wins after all they have told Nigerians, they will still be treated like pariahs. The same treatment will befall them in Labour Party. Therefore, give or take, these governors are losers in waiting.”

Nabena urged Nigerians to ignore the “noise making-governors”, adding that no serious presidential candidate is still counting on their support to win in February.

He said: “The new Electoral Law has reduced dramatically, the influence of seating governors to do magic during election unless the electoral umpire decides to handover the process to them. The less-performing governors are the worst for it because electorates won’t listen to them on election day.

“Again, the innovations as introduced by INEC, if religiously followed, is another challenge for those who think they can sway the vote. This BVAS is not anybody’s mate. People will decide and not governors any longer.

“I will advise those who are still waiting on the G-5 governors to shift their attention to the real voters because these governors won’t be at the polling unit on election day,” Nabena said.

When asked about his assessment of ongoing APC campaign rallies across the state of the federation, Nabena said: “Tinubu’s candidacy is nationwide accepted, that’s why you see massive support wherever the campaign train goes.

“By God’s grace, victory is certain for the APC and that’s why I don’t think we need the support of these paperweight G-5 governors because it will be unfair to our leaders in these five states who are working hard and mobilizing for our candidate (Bola Tinubu) to be relegated for the PDP governors.”

The APC chieftain, however, called for more inclusion in the ongoing process to deliver Tinubu/Shettima presidential ticket.

“I will call on our leaders to bring more people on board. There are certain people who are still aggrieved because of one thing or the other, especially as a result of primary elections that produced various candidates at all levels. The APC national leaders should do more to ensure genuine reconciliation across the board,” Nabena said.