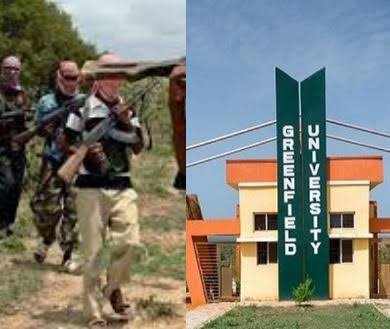 The deadline given to the Federal Government by bandits who kidnapped 22 students from Greenfield University in Kaduna State elapse today, Tuesday, May 4, 2021. The notion that something terrible may happen to the remaining 17 students held in captivity has caused a kind of uneasiness and tension among Nigerians who are desperately waiting for a positive response from the government.

It could be recalled that the leader of the bandits, Sani Jalingo, in an interview on Sunday with Voice of America (VOA), Hausa service, had warned that if the Parents of the abducted Students or the government fails to give them the sum of 100 million and 10 new motorcycles, that they will kill the remaining 17 captives.

It could also be recalled that the bandits, in the period of one week, have killed 5 students of the institution. I
Firstly, it was reported that 3 dead bodies were found close to the university, before some few days later, another 2 was discovered.

According to earlier reports, the bandits when contacted by the University, had demanded the sum of 800 million naira for the release of the students, including a staff of the institution.

Meanwhile, the stance of the Governor of Kaduna, Nasir El Rufai, still remains intact. He had previously said that his administration will not negotiate with terrorists and bandits.

Therefore, many Nigerians have continued to pray and wish for the safe return of the remaining Students in captivity, while waiting for a good response from the government as well.

Below are some of the reactions to the #GreenfieldUniversity

@ Dr Olufumilayo, “There are reports that if the Govt doesn’t meet the demands of the terrorists, more Greenfield University students will be slaughtered.

They have already killed 5 students.

Pls let’s speak up for these helpless children. Lend your voice.

Pls pass this on #Greenfielduniversity”

@Iamseyi_afolabi, “The kidnappers of the #Greenfielduniversity have killed 5 students and still plan to kill more if the govt doesn’t meet their demands!!

Now is the time to speak up so our government can do the needful!!

Retweet and tweet, We don’t want to lose any Greenfield student again!!”

@Precious, “These terrorists have threatened to kill the remaining students today. They need our voices. We can’t let them down. We know @MBuhari and @ProfOsinbajo would just let them be killed then come and express shock. #Greenfielduniversity.”

@frankdonga_ “When I remember the students killed at #Greenfielduniversity and those still in danger, I can’t help thinking that some people somewhere are collecting salaries and allowances for securing citizens and there’s this much insecurity”

@TosinOlugbenga “17 kidnapped students of #Greenfielduniversity might face death TODAY. Their lives, dreams cut short simply cos we’ve a govt that does a lot of talking without any action. The Governor of that state was Tweeting motivations on Saturday. Buhari is a failure!”

Share
52-year-old man arrested for sleeping with his three biological daughters, others Previous post
Presidency speaks on the fate of 17 Greenfield University students in captivity Next post