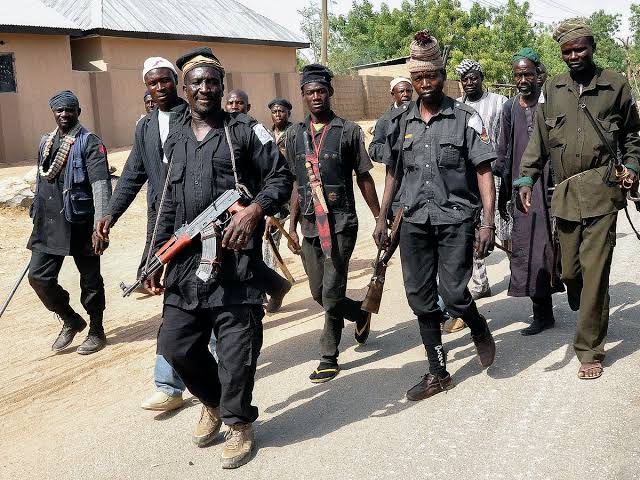 Insecurity: What we need to reduce crimes is Vigilante operatives not state Police

Insecurity: What we need to reduce crimes is Vigilante operatives not state Police

Umar Bakori, the Commandant General of the Vigilance Group of Nigeria (VGN), has again insisted that the country needs vigilantes to weed out bandits and not State Police.

The Commandant General stated this at a press briefing in Abuja, yesterday.

He argued that members of the vigilance group understand the terrain and the communities where purported bandits and miscreants hide.

He contended that VGN was a voluntary organisation and committed to the safety and well-being of the country without mouth-watering entitlements unlike different registered paramilitary organisations whose members are entitled to pension and gratuities.

He appealed to state governors not to politicise the initiative but to wholeheartedly embrace the scheme in order to sanitise the country.

Equally, he appreciated the National Assembly for considering and passing the bill for the Establishment of the group since November 21, 2021.

“We started pushing the bill since 2012. And the media has been of great assistance in making sure that the bill passes through all the stages until it reaches the President.

“The president and his team did a good job in checking some of our errors. He pointed about 30 which was brought back to the National Assembly.

“We went through the same process and today the bill is passed to the president. I will use this medium to thank Mr President for a very good job and to let him know that vigilante is a voluntary organization. Some people were killed. We do not know why they were killed and who killed them.

“Some know that they are going to be killed and they are ready to face the enemy. In doing that they are paid pension and gratuity. That is patriotism. But for us we volunteer.

“We know that we may be killed in the course of our duty and we are not being paid. No pension, no gratuity. That is the highest stage of patriotism.

“The vigilance group of Nigeria is well accepted. We have over one million membership spread in all parts of Nigeria.

“I want the press to assist us in enlightening our politicians. They do not need state police. Our major aim is community policing.

“Community services and maintenance of law and order. We serve in our locality. We do not transfer people from one local government to another.

“We have vigilante in every local government and in every ward. I expect the governors to use their men.

“We are ready to assist whoever is serving in our state; be it army, police or civil defense. We have the advantage of being local.

“We know the nook and corner. We understand the terrains. It is a big advantage. If in any local government you have 10 police officers, I can guarantee you that we have 300 vigilantes.

“They are always ready to be in line of defense. We will take you where the crooks are, where they harvest narcotics, where the hide criminals. They are our people.

“They will serve in their state and local governments. We give them adequate training and retraining. We are making sacrifices.

“We lose a lot of men on a daily basis. Even in Abuja, when some soldiers were attacked it was our commandant from Bwari that led that operation to protect those people.

“He led the army and police and he lost his life. I am very happy that the police, army, civil defense participated in his burial.

“We are not after money but the security of our nation. We get assistance from individuals and corporate bodies.

“But definitely not from government. Which is why we are struggling to get this organisation recognised,” he said.
He, also, clarified that there was no other VGN except the one headed and called on prospective members not to identify with impostors.

“I am sure that we have some miscreants among us who are moving collecting money in the name of VGN.

“We have all the documents. This organisation is registered. We have our certificate of our logo and trademark.

“We has paid our dues with the CAC and our account is well audited. So, if anybody is claiming to be a member of VGN, let him prove it . It does not belong to anybody,” he concluded.