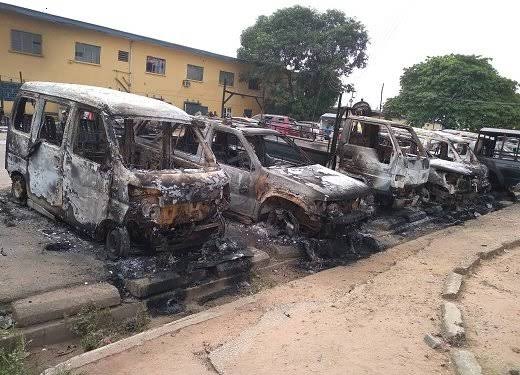 Federal Government has stated that the Indigenous People of Biafra (IPOB) attacked 164 Police Stations in the south-east and also killed 175 Security Personnel in the process.

Attorney-General and Minister for Justice, Abubakar Malami, disclosed this at a Press conference in Abuja.

The Minister said a 24-member presidential committee set up in June 2021 and comprising the police, the Department of State Services (DSS), the National Intelligence Agency (NIA), and Defence Intelligence Agency (DIA), found that Nnamdi Kanu seized the 2020 EndSARS protests and “actively commanded and directed attacks on security personnel and facilities”.

“The committee finds as a fact, that consequent upon the instigating directives of Nnamdi Kanu, members of IPOB/ESN carried out massive attacks on democratic institutions especially INEC facilities with a view to hampering democratic process in Nigeria. These attacks that were carried out between October 2020 and June 2021 include the following,” the minister said.

“One hundred and seventy-five (175) security personnel were killed by IPOB/ESN, comprising one hundred and twenty-eight (128) Police men, thirty-seven (37) military personnel and ten (10) other security operatives.

“Killing of prominent Nigerians, (recently there were gruesome killings of traditional leaders: Obi 1 of Okwudor autonomous community, Eze E. Anayochukwu Durueburuo and Eze Sampson Osunwa of Ihebineowerre autonomous community as well as the killings of Chike Akunyili and eight others as well as the killing of Alhaji Ahmed Gulak on 30th May. 2021).

“That as a consequence of Nnamdi Kanu’s broadcasts, there were 19 attacks on INEC facilities that resulted in the destruction of offices as well as burning of 18 INEC logistical vehicles, several election materials, equipment and ICT gadgets in Abia, Akwa-Ibom, Anambra, CrossRiver, Enugu, Ebonyi and Imo states.

“That 164 police stations and formations, including police headquarters, Owerri, Imo state were attacked by IPOB/ESN leading to the death of 128 policemen, 144 injured while 628 vehicles were destroyed.

“That 396 firearms and 17,738 ammunition were carted away during the IPOB/ESN attacks. That there were 3 IPOB/ESN attacks on the Nigerian Correctional Service (NCoS), including the headquarters of NCoS, Owerri, Imo state where 1,841 inmates escaped. That the headquarters of the Nigerian Immigration Service (NIS), Umuahia, Abia state was also attacked by IPOB/ESN leading to the death of 1 officer”.

Malami added that Kanu “is not alone in its subversive activities; he has accomplices in Nigeria and abroad, individuals and groups as well as state and non-state actors who are aiding and facilitating his campaign against the people and state of Nigeria”.

Share
BREAKING; Tens of ISWAP Terrorists converging for meeting inside 11 Boats neutralised Previous post
I have not asked any politician to beg presidency on my behalf - Sunday Igboho Next post