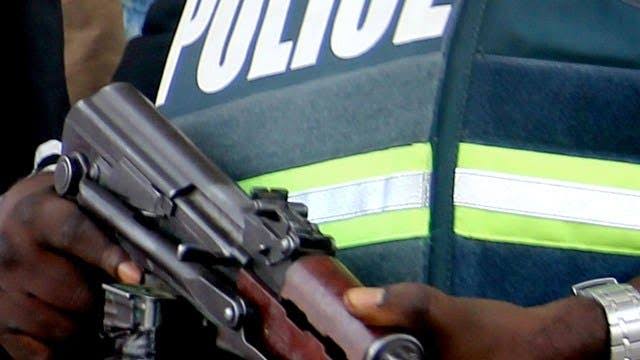 It won’t be business as usual for Transborder robbers gang as Force Intelligence Response Team, IRT has apprehended a robber gang.

The four suspects who were specialist in snatching vehicles from Nigeria and taking them to other West African countries where they are sold at give away prices have been arrested by operatives of the Force Intelligence Response Team, IRT.

It was gathered that the gang also smuggled weapons from neighboring West African countries into Nigeria.

Items recovered from them were two Ak 47 rifles, five cut-to-size guns, 10 live cartridges, one magazine and two foreign plate number which they used to change those of stolen vehicles.

Explaining the gang’s modus oparandi, Babatunde, as he is popularly called, said:

“We target car owners who park to buy things. After snatching their vehicles, we would take them to a border town with Benin Republic from where Odugbile ( a member of the gang) would drive them to the receiver in Benin republic.

“I was a commercial bus driver. I was introduced into robbery in January 2021, by Dada. He recruited me to be driving stolen vehicles from Lagos to Alari, a border community with the Benin Republic. I got N140,000 from the first car we stole and since then, I didn’t turn back.

“Another vehicle, a Toyota Muscle we snatched stopped at Agbara. Dada accused me of causing the vehicle to stop and that was the last time he invited me for an operation, until a month later, when he asked me to pick a parcel from someone which turned out to be riffles. He gave me one of the rifles and said I should hold it for one of the operations we were to go to.

“It somersaulted while I was driving it to the border town. So, we abandoned the vehicle and continued with the GLK to Alari. I was treating myself when I got a call from someone who begged me to show him the way. By the time I called the number and told the caller to meet me at Ipaja, I discovered they were policemen.

“We bought the recovered guns from Benin republic. They were sent to us by Willie through Baba Suru Odugbile. I used part of the money realized from sales of the stolen cars to buy guns. The guns were concealed inside a carton.

“I used part of the money I saved from sales of stolen cars to start a hard drugs business . I have only built a room and parlour at Owode where I live, he said.

The two other suspects, named Suraju and Oni, said they sold the jewellery they collected from their Ajah victim’s home for N1.150 million and N1.7million respectively, without the knowledge of the gang leader.

Oni, said, “I bought a motorbike of N295,000 out of the money realized from the sales of the three rings and hand chain. I gave it to my elder brother and sent N200,000 to my sick mother for treatment. I stayed in a hotel at Iseyin, Ajah for one month, before I was arrested”

50 year-old Odugbile, a farmer and commercial motorcyclist, confessed he was paid between N20,000 and N50,000 for the five vehicles he had helped the gang to move into Benin Republic. He explained that if he got the stolen vehicles, he would change the plate numbers to foreign ones, to avoid the prying eyes of security agents back in Benin Republic.

The suspect would soon be charged to court