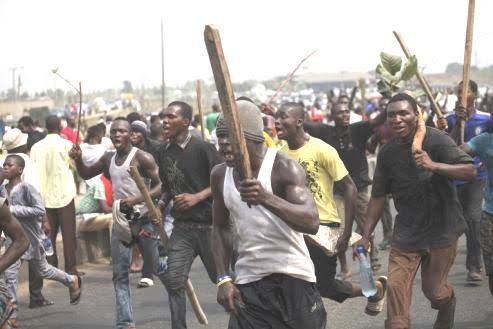 Men suspected to be land grabbers armed with cutlass and other dangerous objects have attacked Egwuatu Estate in Ogwali village, Nsugbe, Oyi local Government Area of Anambra state on Saturday. It was learnt that the land grabbers destroyed many properties worth millions of naira in the area.

The incident according to reports, caused tension and panic in the community as many residents ran for their dear lives following their arrival.

CRIMECHANNELS gathered that the land grabbers arrived the village with a group of Police officers who served as protection for the men. The men it was learnt brought bulldozers and caterpillars to the area.

The Chairman of the landlords Association in the village, Comrade Chukwuemeka Ojukwu told Journalists that the land grabbers came to his house on April 30. He said they were up to 60 in numbers.

He said, “they were in our houses on Easter Saturday, precisely on 3rd April this year when over 60 suspected land grabbers that were well armed and accompanied by some policemen stormed our residences in Egwuatu Estate, Ogwali village, Nsugbe, and started attacking the whole of us”

“They brought down the two security gates, touched the security house, matchete two security men, Chuks Obiefuna and Sunday Okoli, which gave them deep cut on their heads, beat us the residents up and some of us fled for their lives.”

“They destroyed our properties and looted anything within reach and the police were watching them commit this attrocity and that was why we mobilized immediately and lodged the complaint to the police authority”.

“Since then the situation became worse until now that the police authority invited both of us and it became clear that they were land grabbers who have no documented proof of the land they are laying claim to.”

He appealed to the Governor of Anambra State, Dr Willie Obiano and the Inspector General of Police, Usman Baba Alkali to come to their rescue and deliver them from the merciless land grabbers.