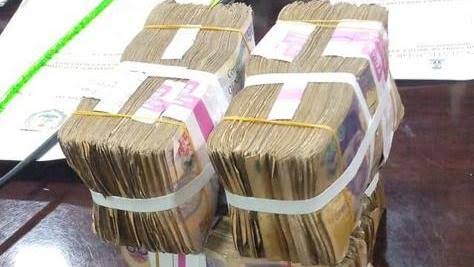 An Assistant Superintendent of Police identified as Mr Sunday Erhabor has been given the sum of 1 million naira by good willing Nigerians after exhibiting a high level of self control and maturity in the face of provocation.

When he asked the offender to stop, Mr Victor came out of his white Hyundai with Reg No. MUS 251 EH, and attacked him, pushing him around repeatedly.

Despite being threatened, ASP Sunday did not in any way attack or shove his attacker, Mr. Victor Ebhomenyen, who had already gone to the length of inflicting bodily injury on him.

Some Nigerians stunned by Sunday’s calmness and professionalism in the face of danger started a donation for the officer in a bid to reward him and encourage good policing in Nigeria.

The donation it was gathered started on Sunday, April 18, by a Facebook user named Ugo Egbujo.

Egbujo in a post on Facebook wrote, “Many of us have indicated interest to bless that Police officer. The idea is to support ethical policing. The idea is to encourage responsible policing. We will give ourselves 48hrs. No amount is too small. It’s a show of support.”

It was learnt that a total of 158 donors raised one million naira which was gifted to ASP Sunday Erhabor on Wednesday, April 21.

Meanwhile, when contacted, Mr. Sunday confirmed receiving a cheque of one million naira issued in his name.

He said, “I received a cheque of one million naira this afternoon. I feel so excited and I thank all Nigerians. This shows to me that Nigerians have not lost hope in the Police.”