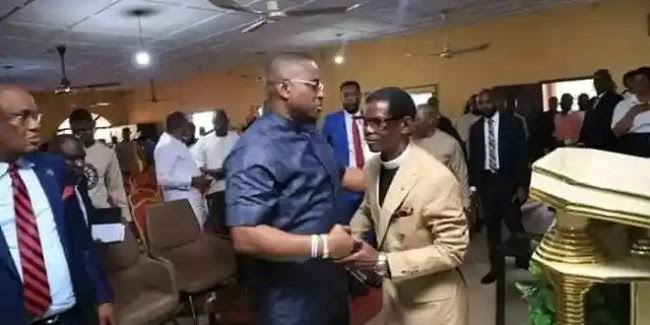 The Apostolic Church in Akwa Ibom State has suspended Pastor E. E. Henshaw, one of her pastors in Eket Superintendency for hosting a Thanksgiving and Dedication Service of the Young Progressives Party (YPP) in Onna.

Nigerian Tribune reported that the announcement by the pastor shocked worshipers.

One of the worshippers, Itoro Eden, was quoted as saying: “Just as the service was going on at Ndon Eyo Township Assembly, in ONNA, Pastor Henshaw shocked everyone when he announced that he just received a message of suspension for opening the doors of the church for YPP.

“He also said the Field Superintendent, U.S Ukpong, PhD had ordered him to appear before the Disciplinary Council of the church the next day to explain why he should not be sacked for allowing YPP to dedicate its campaign and thank God in his assembly.” the worshipper added.

According to sources close to the embattled Pastor, the previous night, the police had invaded his church, harassing him and threatening to detain him should he allow YPP to attend the church.

Two days earlier, while the YPP officials were trying to secure a church for the dedication of its National Assembly campaigns due to start on October 3, 2022, the Apostolic Mount Olive Church in Awa Iman, the governor’s village, which was the initial venue, was sealed off by policemen from Ikot Akpan Abia, allegedly on the orders of the State Government.

It was alleged that thugs were also deployed to block off the entrance of the church on Sunday morning in anticipation that YPP will force its way there after the preacher-in-charge, Prophet David had earlier been warned not to host the party.

Undeterred by the mindless persecution, the governorship candidate of the Young Progressives Party (YPP) and frontline runner for the Hilltop Mansion in Akwa Ibom State, Obong Albert Bassey Akpan (OBA) stressed that only God enthrones and unseats governments.

“We are a people others rejected but God saw our sincerity of mind and is using us to achieve His purpose. YPP will shock other parties, through the mass support of the people so that when we come in, we will not behave like them:

“God told Samuel, God is going to do something in Akwa Ibom that ears will hear and marvel.”

He lamented a situation where YPP has been blocked from all the public venues in the state, including Ibom Hall, Ikot Ekpene Stadium and even some churches in Onna.

“YPP is the party with the strongest candidates,” he said, adding, “You must not belong to occultic circles before they give you the opportunity”.

Sen. Albert, however, questioned why the member of Mbo defected but his seat was not declared vacant in the state House of Assembly but when Usoro Akpanusoh and Asuquo Nanna were suspected to belong to YPP, their seats were declared vacant.

“Whether they like it or not, Akwa Ibom will be free, YPP is for service to the people and now is the time”. He stressed.

Akparawa Ephraim Inyang who spoke on behalf of other candidates made a covenant with God and pledged that when they become victorious, he will sponsor the refurbishing of the entire Church.

As a secret for constant replenishing, Inyangeyen encouraged people to always sow into God’s hand and expect multiplication, later.

In his homily, Apostle Evans Adam said God was prepared to take Akwa Ibom out of misery. “For every generation, God prepares a man that will transit the people to a destination. He may not be our choice but God prepares him for the next champion. May you never miss the opportunity God has given to us by choosing and voting wrongly”, he admonished.

Drawing from Ezekiel 21: 27, Adam said: “God will overturn because he has heard the cries of his people, not to please a man” he added.

The pastor also said God will pick a man after his heart; a man with a track record and legacy to change the story of the people for the better.

“If you follow a man that knows the way, you will not miss the way”, Adam said, urging the people to vote for transformational leadership identified by its selfless contributions, when the time comes, to push God’s agenda.

While dedicating the National Assembly campaigns, Prophet David Udo Udo, reading from Lev 26:36, prayed to God to use the sound of a shaken leaf to change the heart of many Akwa Ibom voters in favour of the right candidate.