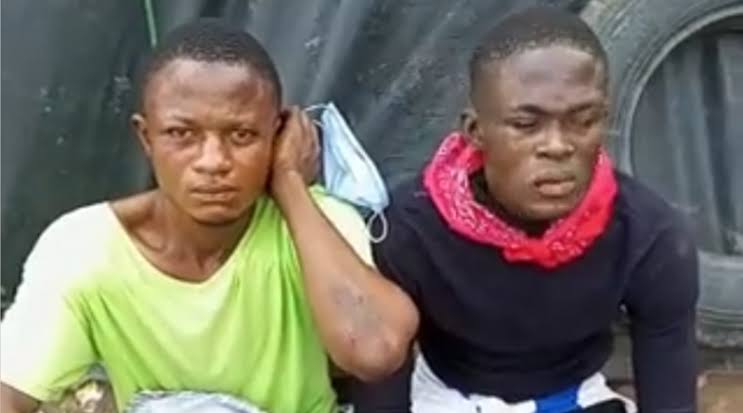 Two supporters of the Labour Party presidential candidate Peter Obi who were attacked by some touts at the Oshodi motor park for being in possession of the party flags are yet to report officially to the police.

The touts allegedly seized the boys, beat them to a pulp and were about to set them ablaze before a courageous Soldier rescued them.

According to the victims in a video that went viral, the flag boys claimed that they were going about their normal duty with the Labour Party flag and insignia, when they were accosted by motor touts who were ordered by their superior to beat them up and set them ablaze.

One of the victims said “When the touts who were ordered by their superior seized my friend, I took to my heels to the motor park and boarded a cab, while the cab was loading, the touts traced me to the cab, forced me out of the cab, and took me to where my friend was also kept”.

“Their superior ordered that we should be beaten, killed and set ablaze. We were beaten like common criminals. They flogged and were about to set us on fire before a Soldier came to our rescue. We are having internal bleeding and pains all over our bodies. Our crime is that we are not supporting their candidate.”

A human rights activist, Mark Chidozie, has called on Lagos State Commissioner of Police Mr Abiodun Alabi to take the matter up and also appeal to Inspector-General of Police, Mr Akali Baba, to live up to his promise of protecting all stakeholders in the upcoming general elections.

“This matter is a pointer to what will happen to people in Lagos during the electioneering period. None indigenes are going to be intimidated as it was done last time where NndIgbo reside in Lagos. The police management team should protect electorates and make sure that they are not disenfranchised,” he said.

Lagos State Police Public Relations Officer (PPRO) SP Benjamin Hundeyin said though he was aware of the matter, that it was not reported officially to the police,” I chatted with the victims and I advised them to report the matter to the nearest police station.”

“I went as far as to put the Divisional Police Officer (DPO), on notice, and he is still on standby, waiting for them, but as I am speaking with you, they have not reported to the police”.

“It doesn’t have to be Peter Obi supporters, but anybody who attacks another should be arrested and prosecuted according to the law of the land. Let them go and report to the police and see if the case will not be investigated by the police. Yes, I assure you that the case will be Investigated.”

The IGP, during his goodwill messages at the 2023 general elections peace accord signing ceremony organised by the National Peace Committee on September 29 in Abuja, said many things should be avoided, adding that the “use of fear and intimidation such as the use of masquerades, physical force or coercion in any form including the retention and use of private security organisation, groups or individuals for purpose of providing security at processions is prohibited.”