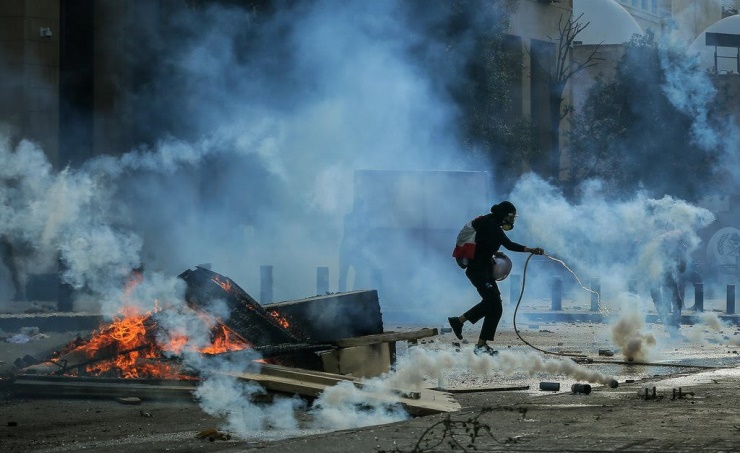 “I will put forward a bill to hold early parliamentary elections on Monday,” Diab said in a televised address. “I call on all political parties to agree on the next stage … I am with [the] Lebanese aspiring for change.”

Diab floated the proposal as thousands of protesters, furious with their leaders after Tuesday’s monumental blast at the Beirut port, took to the city streets to demand drastic reforms. “The scale of the catastrophe is bigger than anyone can imagine,” Diab said, referring to the blast. “We are in a state of emergency.”

Protests escalated into clashes between protesters and police as furious residents mourned the victims and called for the removal of what they described as “corrupt politicians.” Police used tear gas to disperse the protesters, a number of whom stormed several government buildings, including the ministries of foreign affairs, economy and energy, witnesses said. Late Saturday, the Lebanese army succeeding in driving protesters out of the ministries they had briefly broken into and vandalized, burning images of Lebanese President Michel Aoun.

At the Foreign Ministry, demonstrators raised a huge placard at the entrance reading: “Beirut is the capital of revolution,” Lebanese privately owned television MTV reported. READ ALSO: Lebanon president rejects global probe into Beirut port blast “We want the corrupt leaders of Lebanon to know that these minsiteries are for the people of Lebanon and not for them,” shouted one protester at the scene. Central Beirut resembled a battlefield late on Saturday as stones littered the streets, garbage burned and spent tear gas canisters filled the sidewalks. At least one person, a police officer, was killed after being “attacked” by protesters while “helping people trapped” inside a hotel in central Beirut, the country’s Internal Security Force said in a tweet.

The Lebanese Red Cross meanwhile said at least 238 people had been injured in Saturday’s clashes, 63 of whom were transferred to hospitals. Eyewitnesses said shots had been heard near to the parliament building. Earlier, crowds packed the roads leading to the city’s central Martyr Square, banging on the iron fences on the pavements in a demonstration of their fury.

A call to join a march from ground zero of the blast site towards the square in Beirut’s central district asked participants to wear black in a sign of mourning for the victims. “We want to vent our anger against the ruling class, who knew about the dangerous substance stored inside Beirut port and did nothing,” Roula Ajouz, a participant in the march, told dpa near the blast site. On Tuesday, a huge explosion ripped through Beirut’s port, killing at least 158 people, wounding 6,000, displacing some 250,000 to 300,000 from their homes and inflicting massive destruction across the city. A Lebanese Health Ministry official said on Saturday that 25 bodies whose identities remain unknown have been recovered from under the debris of the blast.

The official told DPA that 45 people were still missing in the wake of the explosion that rocked Beirut. The search is still ongoing. The blast took place in a warehouse housing some 2,750 tons of ammonium nitrate, according to the Lebanese prime minister. The dangerous material had been stored there for years. “People are enraged, people want justice for this negligence,” said Pierre Adra, a protester. Organizers of the protests are the same NGOs and activists who have been demanding reforms and accusing Lebanese politicians of corruption since street demonstrations erupted in the country in mid-October.

The US embassy in Lebanon late on Saturday tweeted in support of the anti-government protests saying “the Lebanese people have suffered too much and deserve to have leaders who listen to them.” “We support them in their right to peaceful protest, and encourage all involved to refrain from violence,” the embassy wrote. READ ALSO: Lebanon mourns victims of devastating blast, searches for missing Several foreign officials meanwhile arrived in Beirut to show solidarity with Lebanon, including European Council President Charles Michel, who called for an independent inquiry into the cause of the catastrophe and offered European expertise.

Promising European support, Michel said that 33 million euros (38.9 million dollars) for emergency needs had already been mobilized by the bloc for Lebanon, along with more than 250 rescue workers. French President Emmanuel Macron, who visited Beirut on Thursday, plans to hold an international video conference from 2 pm (1200 GMT) on Sunday to raise funding for Lebanon, sources close to the presidential office said.