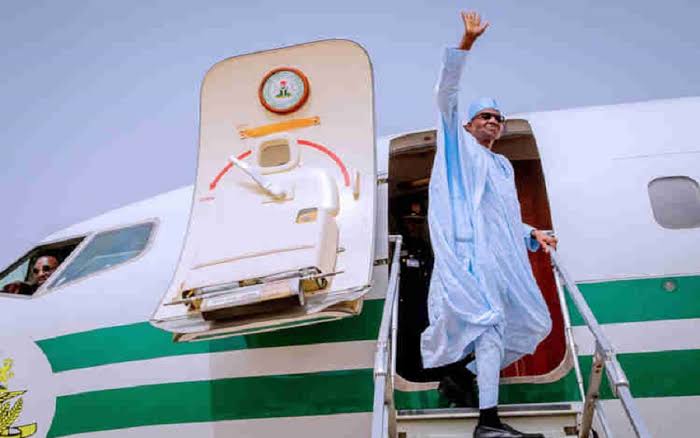 President Muhammadu Buhari has reportedly embarked on a state visit to Portugal on the invitation of President Marcelo Rebelo de Sousa.

According to reports, the President, who departed Abuja for the Portugal’s trip on Tuesday, was accompanied by Minister of Foreign Affairs, Geoffrey Onyeama; Minister of Information and Culture, Lai Mohammed; Minister of Industry, Trade and Investment, Adeniyi Adebayo; Minister of Youth and Sports, Sunday Dare and Minister of Communication and Digital Economy, Isa Pantami.

A statement issued by the Senior Special Assistant to the President on Media and Publicity, Malam Garba Shehu, said President Buhari, who will hold official talks with his Portuguese counterpart, will be conferred with the country’s National Honour and decorated with ‘Great Collar of the Order of Prince Henry.’

He said the two presidents are expected to chair an enlarged bilateral meeting and witness the signing of some agreements bordering on issues of mutual concern.

Shehu added that President Buhari will also visit the Portuguese Parliament and hold discussions with its president, Dr Augusto Santo Silva, as well as the Prime Minister of Portugal, Antonio Costa.

He said in the course of the visit, the President is scheduled to address a forum of Nigerian and Portuguese businessmen and hold separate meetings with select Portuguese Chief Executive Officers and prospective investors in Nigeria.

Buhari, according to the statement, will also participate in the United Nations Ocean Conference, which began in Lisbon on Monday, June 27, and runs till July 1.

The statement said the conference, co-hosted by the governments of Kenya and Portugal and supported by the UN Department of Economic and Social Affairs (DESA), aims to accelerate the adoption of science-based innovative solutions to challenges facing oceans and the global marine ecosystem.

Shehu said the President would engage members of the Nigerian community in Portugal on matters affecting them and developments at home, adding that he would return to Abuja on Saturday, July 2.