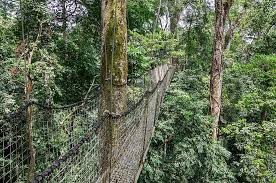 There has been shocking narration from victims who were abducted from a Niger State Transport Authority (NSTA) bus last week.

Some of them, who shared their captivity experience, described it as horrible, praying never to have such an encounter again.

One of the victims, Hajia Jummai Isah, gave thanks to God for making her survive the terrible situation.

Jummai said “It is not easy, Walahi! They were threatening us and beating the men. They really beat the hell out of the men but all they wanted from us was money. They kept demanding money from us. They gave us dirty water to drink.

“Their ammunition is out of this world. I have never seen those kind of arms in my life. They have different kinds of assorted weapons. They are more than 1,000 in the bush.

“I am happy now that I have regained freedom. I thank God that I am still alive because I thought I would not come out alive,” she said.

A thirty-eight-year-old Muhammed Kindagi, who is a civil servant with the Niger State Science and Technical School Board, said he was abducted while returning from a friend’s wedding.

He narrated “Immediately we met the bandits, they asked us to park our car and they started shooting before we came out of the car. The bullet tossed my head. When I started seeing blood, I thought the end had come.

“We trekked for 24 hours daily. They usually take us one after the other. That was what we did from the time we were kidnapped till the following morning, ” Kindagi said.

“If we eat food in the morning, we won’t eat another one till evening again. They gave us contaminated water to drink. We were made to cook by ourselves because they asked us to cook. We were sleeping on bare floor in the bush. We were not tied but guns were pointed at our heads and they were beating us constantly.

“We met one victim in the camp when we got there. We don’t know how many of the bandits that waylaid us that day but we met a lot of them on our way into the bush. The first day, they took us to a hill, from there we moved under a mango tree. On the third day, we moved inside the bush which was our final destination before we got rescued, “he narrated.

“They beat our women too. There is one useless one among them who didn’t bother whether you are a woman or man before he starts beating you. They beat us with stick. As they are beating us, they are asking us to bring money. All of them are Fulani but they communicated to us in Hausa while they spoke Fulani within themselves.

“They asked us to forgive them and we said we had forgiven them and that they should forgive us too so that we could leave the bush.”

He also disclosed that they were kept away from the Kagara students who were kept at a close distance.

He narrated a similar story to that of Hamza Muhammed Buhari, who also said he had a tough time with the “enemies”.

“We were on our way to Minna and a car signaled to us to stop and we did. People in the car were shaking. Some said we should go back but somebody from outside said they were vigilantes, and that made us proceed. After we moved, we were attacked by the bandits numbering about ten; they started shooting sporadically.

“We cannot say precisely where we were taken after the abduction, we were just moving into the bush for hours. When we got to a place, we would rest and continue with the movement again and they kept beating us but they used their motorcycles to carry the women but men trekked throughout.

“They starved us and only gave us a handful of food. We cooked rice with contaminated water. We were tortured daily. It is indeed bad and terrible,” he said.

Meanwhile, victims of the abduction have been taken to the hospital for treatment.