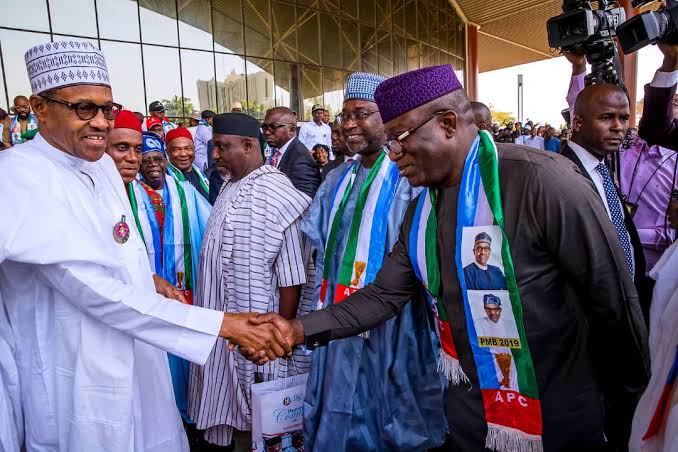 Sack all workers above 50yrs, tax anyone earning above N30,000 – Govs tells PMB

Sack all workers above 50 years in Nigeria, tax anyone earning above N30,000 – Govs tells PMB

The Nigerian Governors have advised the federal government to retire all federal civil servants who are older than 50 years in a bid to prevent the nation from imminent economic collapse,

The governors also want the government to raise taxes across boars as well as levy anyone earning N30,000 and above monthly.

According to the Vanguard, the governors made the proposal at a meeting with President Muhammadu Buhari in July.

The proposal also urged the government to begin implementation of the updated Stephen Oronsaye Report, which suggested merger and shutdown of agencies and parastatals with duplicated or contested functions as a way to address bureaucratic inefficiency and reduce the cost of governance.

The Vanguard reported that officials familiar with details of the meeting, who spoke to PREMIUM TIMES, explained that the governors were concerned about the deteriorating state of the economy and a proposal to restore fiscal discipline was presented to the federal government.

“The federal civil service employs just about 89,000 people but will spend about N4.1 trillion on personnel costs this year, from its N17 trillion budget for the entire country. It is not clear how many workers are above 50 years of age, or how much goes to them.

“The suggestion comes as indications emerge that the nation may be teetering towards the cliff of economic collapse.

“The online publication had reported that Nigeria’s external reserves amount to only $15 billion, well below the $36 billion balance on the gross external reserves claimed by the bank. With the nation spending N5.9 trillion on imports in the first quarter of the year, reserves of $15 billion would barely cover four months of import,” the newspaper reported.

It further reported that: “Last week, details emerged that the balance in Nigeria’s Excess Crude Account had depleted significantly from $35.37m to $376,655, leaving the nation with no buffers to stabilize the economy and its currency. Yet another indication emerged recently that the nation was broke as debt service surpassed revenue.

“According to details of the 2022 fiscal performance report for January through April, Nigeria’s total revenue stood at N1.63 trillion while debt servicing stood at N1.94 trillion, showing a variance of over N300 billion.”

The governors, according to the sources, also asked the government to reduce duplications (e.g. empowerment programmes) and waste, reduce 1% granted to NASENI to 0.2%, amend the Act in 2022 Finance Bill, reduce personnel costs of federal government MDAs, and expedite privatization of non-performing assets like the NDPHC power plants.

Similarly, the governors urged that the 2023 – 2025 MTEF should reflect the suggestions and government’s commitment to restore fiscal discipline while the planned 22% increase in salaries in 2023 be reconsidered. They added that the fiscal deficit should be reduced to no more than 2% of GDP in 2023 – 2025.