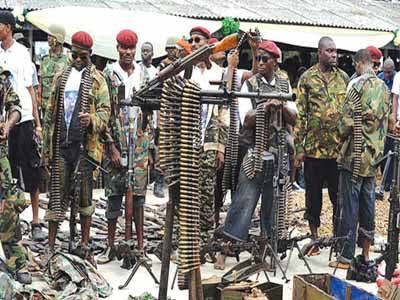 Several communities in the Niger Delta region are reportedly brewing with tension following the federal government’s snubbing of their leaders in the awarding of contracts for the protection of oil pipelines in the region.

According to Saturday Sun, the leaders of the various communities in the region are fuming at the federal government for awarding the juiciest of the oil pipelines protection contracts to an ex-leader of the Movement for the Emancipation of the Niger Delta (MEND), Government Ekpemupolo aka Tompolo, who they claimed has no power or can watch over the pipelines in their communities.

The communities leaders said the Nigerian National Petroleum Company (NNPC) Limited should have randomly shared the contract awarded to curb the perennial oil theft in the region.

A group of ex-militants within the communities that described themselves as Creek Men in Bayelsa and Rivers have accused the Minister of State for Petroluem, Chief Timipre Sylva of trying to set confusion in the Ijaw land.

According to them, the pipelines crisscrosses several communities, even as they wondered that groups from such communities were not considered for the contract that was solely given to Tompolo.

The leader of the ex-militants, who identified himself as General Lamptey, said there was no way Tompolo’s companies would be allowed to work in the designated areas that has leaders that should have benefitted.

“People in these communities were not given the job and he went to give someone in Oporoza. Is it that we do not have people? In Rivers, Alhaji Asari-Dokubo was not given, Ateke Tom was also not given, and they think they can succeed. There is no way we shall accept it. By not giving this contract to the original indigenes of the community, this contract would not work. Federal Government and NNPC should know this.”

Lamptey, who dared the surveillance contractors to resume work, said some people on ground would resist the personnel of the surveillance outfits. A source close to the militant camps in Rivers State said there are 83 kilometres of pipelines in Kalabari land, noting that Ateke Tom, who is now a traditional ruler, was not considered, making it difficult for any group to work successfully there. He explained that the same treatment meted out to Asari- Dokubo would have consequences for the success of the surveillance contract in Rivers State.

“The whole contract issue was manipulated to exclude Asari-Dokubo and Ateke Tom. It is sad how surveillance contracts of pipelines in Rivers were awarded to someone outside the state. It is not going to work. Nobody is going to work with them. It is going to fail. They are not serious. When they are ready we are going to know,” he said.

However, sources close to Tompolo said he has taken note of the protest and is going to address some of the grievances in due time.

“At the meeting he had in Oporoza with a cross section of groups from Bayelsa and Delta, Tompolo made it clear that everybody would be carried along. He has done this job before successfully and he is going to do it again. He has met with people in Ondo. He will meet with people in Imo and Rivers State.

“He definitely needs people who are on ground to do the job. People should trust the process. It is a Niger Delta job and everybody is going to do it together.”

Also speaking, a former President of the Ijaw Youth Council, Chris Ekiyor who was part of the consultative meeting which Tompolo held with youths in the area, said those criticising were embarrassing the region.

“The problem with the Ijaw man is that we like this Pull Him Down Syndrome (PHDS). When in 2002 I mooted the idea of amnesty, I was called all sorts of names asking why I was advocating amnesty when we have not gotten our freedom. But those people shouting then are the beneficiaries of the amnesty programme; they were the ones that were trained, got jobs and went to school on scholarships.

“This surveillance contract was not just given to GOC (Tomoplo); he bid for it like other businessmen and his bid was successful. He has said that the contract is not about him but the people. It is about the men, women and youths in the Niger Delta. He is meeting stakeholders to ensure that no one is left behind. Those grumbling are in a hurry and they are not being fair. “We have learnt our lessons and those who think they can instigate a crisis are going to be disappointed. Tompolo is doing everything to ensure that unemployed people in the region benefit to demonstrate to the government that we are capable of taking care of our region.”