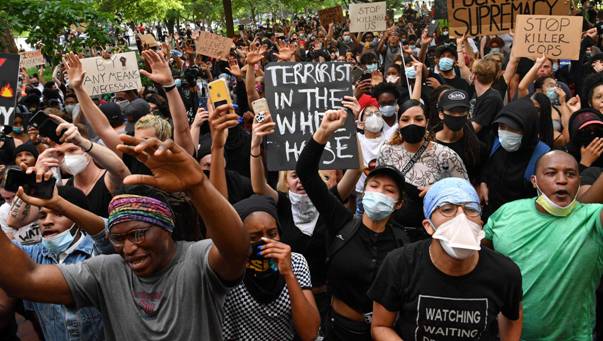 Trump admitted going to Underground Bunker as US protests rages

United State President, Donald Trump, while speaking to the Fox News Radio, has disclosed the main reason why he was taken to the White House underground bunker.

The President debunked claims that he and his family members took refuge at the underground bunker because of the actions of protesters on the death of George Floyd.

Donald Trump, who disclosed that the facility is called Presidential Emergency Operations Center (PEOC), explained that he was taken there by Secret Service on Friday for inspection purpose as it serves as a shelter and communications center for U.S. Presidents and others in case of an emergency.

“It was much more for the inspection. I was there for a tiny, little period of time. They said it would be a good time to go down and take a look because maybe sometime you’re going to need it”, he told Fox News Radio.

When quizzed on his statement to deploy military personnel if the protests over the death of George Floyd persists, the President reiterated his claims.

“If they don’t get their act straight