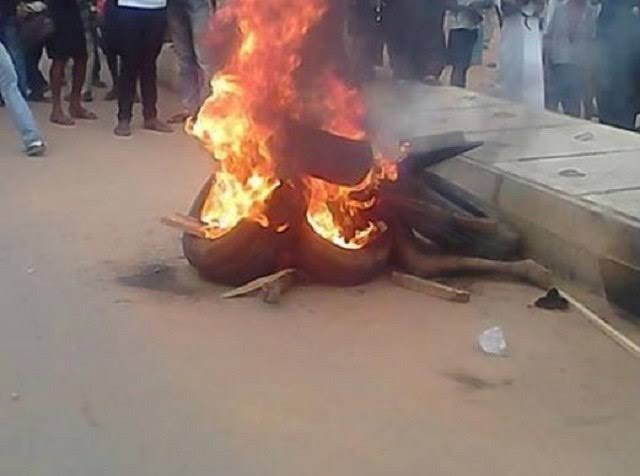 Two unidentified suspected armed robbers have been burnt to ashes in Ibadan the Capital City of Oyo State for dispossessing victims of their valuables.

According to DAILY INDEPENDENT, the thieves were said to have been apprehended at Gbaremu area of Ibadan by angry youths and bunt to death while trying to attack a victim.

It was gathered the victims, whose names were given as Rasheed Ololade and Temitope Samson, are currently in the University College Hospital (UCH), Ibadan, where they were operated upon to remove pellets lodged in their bodies.

We also learnt that before encountering the armed robbers, the victims had gone to Premier Hotel, in the city, to swim.

Done with the swimming when the pool was closed at 6pm, the duo got dressed and left the hotel and were walking down the road on their way home between 6:30 and 7pm when they were blocked by two men riding on a motorcycle.

One of the armed robbers had made move to snatch Ololade’s phone but his feeble resistance led to his being shot.

With his phone taken from him as he fell, his friend, Samson, attempted scampering into safety but was pursued by the armed men who shot him and also collected his handset before speeding off.

Sympathisers who heard the gunshots ran to the victims and rushed them to UCH where they were wheeled to the theatre for emergency operations.

Piqued by the attack on innocent people, an angry mob reportedly pursued the armed robbers till they were apprehended at Gbaremu area of the city while trying to attack another victim, unknown to them that they were being trailed.

A source, who did not disclose his name, said that that the robbers attacked a POS operator close to a hotel in the area and collected about N200,000 and phone from him before moving to another POS operator called MaiTea. But they were said to have failed in the attempt as the gun fired by them did not penetrate their target’s body.

He said further that people in the area, including him, heard the gunshot after 8pm, which made all those around the scene to flee for their lives.

Another source said that as the armed robbers attempted to escape on their bike, a taxi driver who had sighted all the happenings deliberately hit the motorcycle, making them to fall.

Those who were initially pursuing them and angry mob around the scene of last operation reportedly swooped on them, beating them with sticks and other objects, after which they sprinkled petrol on them and set them ablaze till they were burnt beyond recognition.

When visited the spot on the median along the road, stumps of the charred remains of the thieves were still there with the burnt out tyres used on them.

When contacted, the Public Relations Officer in the University College Hospital (UCH), Ibadan, Mr Toye Akinrinlola, confirmed that the two shot victims were brought to the hospital, but said they were in stable conditions.