Reacting to a video making the rounds on social media of an alleged attack on Ikorodu Police station, Igbogbo in Lagos by armed hoodlums, the Lagos State Police Command on June 8, has cleared the air by stating that there was no such attack on any of its formation in Ikorodu and its environs.

The information was contained in a press statement signed by the Lagos State Police Public Relations Officer, CSP Olumuyiwa Adejobi.

According to the statement, the Command said there is no formation called Ogijo Police station in Lagos. It also clarified that the viral video of a Police formation been attacked, as seen in the viral video, happened in Osun State.

The statement reads, “The Lagos State Police Command wishes to clear the air that there was no attack on Ikorodu Police Station, Igbogbo, Lagos State or any of its Police formations in the State.”

“There is no Ogijo Police Station in the Lagos State Police Command but in Ogun State, and the same station, Ogijo, was never attacked as being speculated in the news.”

“The video in circulation was a portion of the scene of the recent Bank Robbery Attack in Ikire Osun State.”

Meanwhile, the Lagos State Police Command urged Lagosians to disregard the video circulating the internet. It said the video is fake and mischievous. It also reiterated its commitment to providing adequate security in Lagos State.

Share
JUST IN; Civil Defence officer arrested by Policemen for shooting driver dead Previous post
IPOB is like a dot in a circle with no where to go; we will send Military, Police after them - PMB Next post 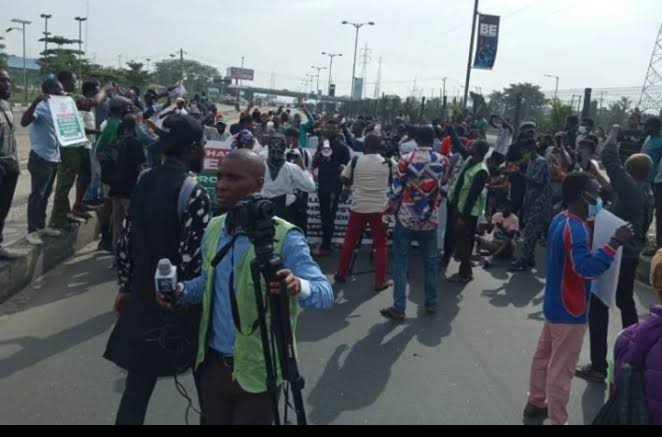 JUST IN; Two suspected robbers arrested for invading a Church inside GRA