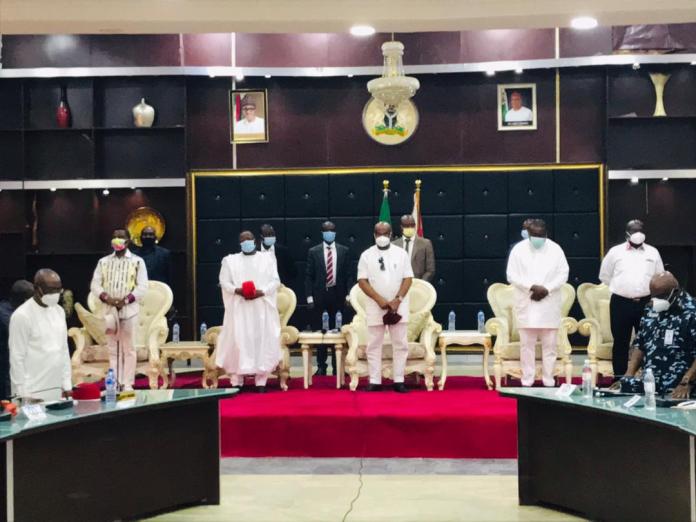 We will make South-East region hot for you – IPOB threatens Governors, Ohaneze, others

The Indigenous People of Biafra, IPOB, has raised alarm that some South East Governors are working with the Igbo apex group, Ohanaeze Ndigbo, Tradinonal Rulers, and President Generals of some communities, and are compiling names of suspected operatives of the Eastern Security Network, ESN as well as IPOB members and supporters for possible persecution.

IPOB in a statement by its media and Publicity Secretary Emma Powerful, said that if the Governors don’t put an end to their plan, it will make the zone too hot for them.

Emma Powerful claimed that IPOB uncovered a secret file containing the list of the suspected ESN and IPOB members that were facing possible execution.

He said that the State Governors planned to give the list to security agents who would then torture them amid interrogation and eventually kill them after getting information from them.

His statement reads, “The South-Eastern Governors in collaboration with Traditional Rulers in the Zone and some PGs of communities are compiling names of suspected IPOB members in their respective communities to hand over to Nigeria security agencies for possible executions.”

“The arrangement has been perfected to help Nigeria Police and Army to quickly pick anybody suspected to be IPOB member and ESN operatives in the zone.”

“Our intelligence further revealed that they took this decision to launch this joint military operation to quench and permanently silence what they termed as IPOB and ESN menace in the zone.”

“IPOB intelligence unit gathered that these enemies within and without have perfected arrangements to abduct our people and put them incommunicado in the security dungeons in unknown locations.”

“It is unfortunate that our so called leaders could not see or observe how Fulani terrorist herdsmen are raping and murdering our mothers, wives and sisters in the farms across the Biafra territory but they see us as their problem.”

He explained that the group, IPOB doesn’t have any link with unknown gunmen suspected to the behind the wave of bloody attacks against security formations in the zone. He wondered why the Government will pin them to the numbers of crime committed by persons who aren’t their members.

He warned South East Leaders to retrace their steps or brace up for the grave consequences if they carry out their planned action of executing any of its members.

He said, “If South East Governors do not stop this plan against their people, IPOB will make the zone too hot for them.”

“We expect all tradinonal rulers and PGs in the South East communities to retrace their steps before it gets too late. The land will also rise against them if they allow this to happen. Any IPOB member or ESN operative killed shall be avenged, “the statement reads.