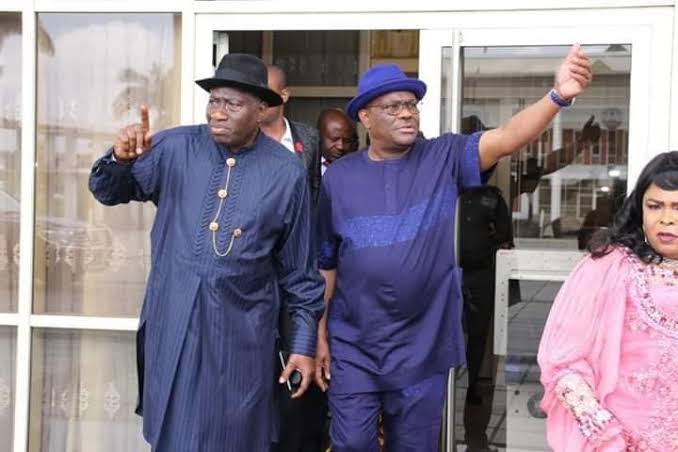 Why ex-President Goodluck Jonathan will not back Atiku – Wike

Why ex-President Goodluck Jonathan will not back Atiku – Wike

He recalled that Atiku never backed Dr. Jonathan for his re-election bid, adding that he mounted pressure on the former president to relinquish the 2015 presidential ticket of the party.

Wike said the former vice president embarrassed and humiliated Jonathan, who as a sitting President and candidate visited him in Donchester Hotel, London, to beg him to return to the party to support his second term bid.

The governor spoke when he led his Ebonyi State counterpart, Dave Umahi, to inaugurate the Akpabu-Omudioga-Egbeda road constructed by his administration.

He said: “What I don’t like is that we forget history easily. In 2015 when Jonathan as a sitting president won his primary, Jonathan went to London in Donchester Hotel to plead with this our presidential candidate today, Atiku Abubakar, to say ‘please, my brother, come back to the party and support me’.

“Do you know the condition they gave to Jonathan? That he should relingush his ticket not to run as president of Nigeria. That was a sitting president and presidential candidate of a ruling party. They gave him that condition, telling him to relinguish that ticket for him not to run.

The governor said some persons he described as rent seekers from Rivers were running around the presidential candidate banking on promises that they would become ministers.

Wike, however, said it was foolhardy for people who had not captured an animal to be deciding how it would be shared.

He said: “When you see some rent seekers from here going around saying they will give me minister of finance, they will give me governor of Central Bank, you haven’t killed an animal and you are saying women, don’t eat it. Kill the animal first to know whether women will eat or not.

“I don’t want that kind of promise. Give my people this one we are talking now. Give us. Give us the chairman so that things can move freely. I am not greedy. They come and tell you stories.

“I challenge them. Did they not embarrass Jonathan when he was running as a sitting President? I said Donchester Hotel in London. But they said he should relingush the ticket. Now, you are not a sitting President, you are just a presidential candidate. We say hold it, we will support you but let us have this one.

“People should appreciate things in life. So all those people, scavengers, vampires running around everywhere thinking they have what it takes. Nobody. The women seated here, all the youths, all these men will decide what will be as far as this election is concerned. So, nobody can intimidate me”.

Wike said some people were not happy that he commended Buhari for releasing the money he was using to execute projects in the state, warning them some persons to stay clear of him and whatever plans they had against him.

He said: “That is why when I said they should thank Buhari, people started fighting me. I came here you brought yam, plantain, cow; what are you doing. Is it not thanking me for this road? What is wrong if I said thank somebody who released money nobody released and I am using it to work for my people?

“They are coming to fight me. You can’t fight me. Even God says when someone has helped you, give thanks. When you give thanks, you get more. For those who don’t like to say thank you, it is their business and they will face God later.

“So, I have no apology to give to anybody. Let’s warn anybody who dares to do any rubbish because I said we should thank the President. Be very careful with me because what will come you can’t stand it”.